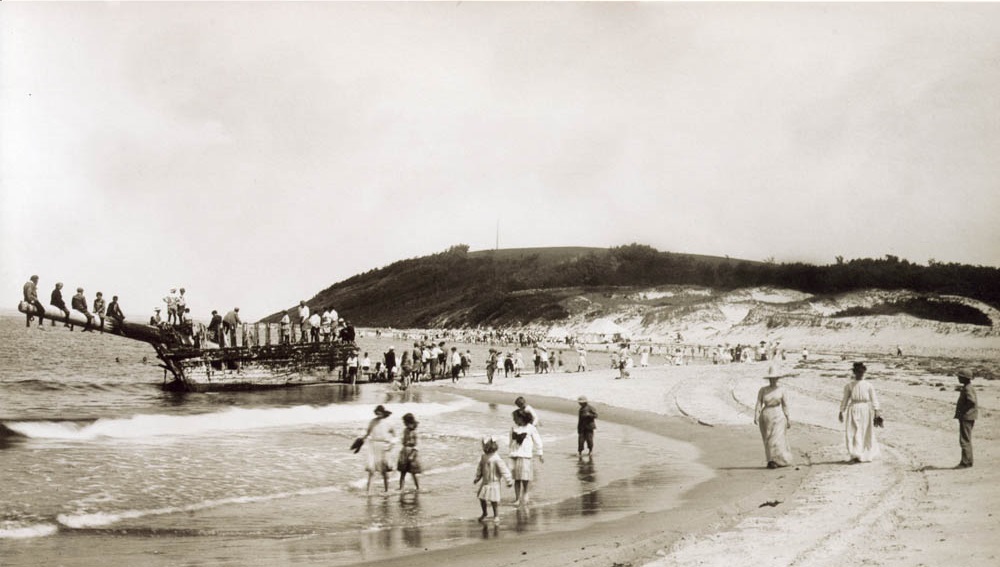 In the Castle Hill Collection, we have many photos of the Annual Crane Beach Picnic. The picnic was first held in 1911 to celebrate Cornelius Crane’s sixth birthday. Cornelius was the son of the Castle Hill landowners Richard T. Crane Jr. and Florence Higinbotham Crane. The Cranes invited all Ipswich schoolchildren to participate, and the Picnic continues to this day, thanks to a trust set up by the Crane family.

Pictures from the first year of the Picnic show adults and children exploring a shipwreck on Crane Beach. Over time, that shipwreck disappeared as shifting sands covered the boat up to its deck, obscuring its hull, until a further beach shift revealed it again in 2004.

For years it was debated whether this shipwreck was the Ada K. Damon, a schooner that went down in the Great Christmas Snowstorm of 1909. The captain, A.K. Brewster, had sold his farm in York, Maine and invested everything in this sand schooner, only to have it sink during his first trip out loaded with sand from Plum Island. Others thought the wreck might be the Edward S. Evelyth, an older ship skeleton that also lies near the water’s edge.

In 2015, Vic Mastone, Director & Chief Archaeologist for the Massachusetts Board of Underwater Archaeological Resources, led a team of archaeological students from Salem State University to settle the debate. Through careful measurements of the shipwreck’s ribs, these experts were able to confirm once and for all that it is indeed the Ada K. Damon.